skip to main | skip to sidebar

Back to Haunted Computer

I'm relocating back to AuthorScottNicholson.com. Long story short, I finally figured out how to undirect from my Web site. I'll keep this up a while but I've exported it to the new blog. Hope you follow me over there! I'm trying to keep everything consolidated under the Haunted Computer label.

As I finish up the latest novel (the one closest to the end), I look around at the various crossroads, and on most of the detours, it doesn't really make sense to remain "Scott Nicholson." Indeed, I've already submitted one novel under a pen name, and another book I'm working on is in a distinctly different genre. I am very grateful to have published some books and I have some loyal readers. There's nothing as humbling, nor as clear a reminder of why we do this, as when you get a note from someone that says "You're my new favorite author."

Scott Nicholson is a decent commodity and has published some solid work. He is not a bestseller, just a humble hack pouring his heart and lungs out on a keyboard. The word "horror" is on the spines of his six novels but he doesn't feel horrible at all. The books just happened to have some ghosts and creatures in them. They are about faith and love, things Nicholson believes in. He doesn't believe in ghosts and creatures. They contain some darkness. Nicholson has seen darkness. They have some redemption. Well...it is FICTION, after all.

After a flurry of study, research, and inquisition, I've been able to take a more remote look at what I write, how it is presented, and, on the marketing end, how it is categorized out there in the wider world. One thing the online booksellers really excel at is compiling search histories and customer track records and seeing which books you're clumped with. I wouldn't go so far as to say I'd never read the types of books I write, but I'm nowhere near my literary heroes. A lot of that comes to me, and how hard I work at it, and how much I want it. Boy, I love this job. Even though it's a part-time occupation, it's a full-time obsession. It is incredibly satisfying to be published. In the rank of things I wanted to do on this planet, that's probably in third, right after wife and kids (which are really tied for first, I suppose.)

But maybe Scott Nicholson needs to die. It won't be pretty, because I've known him long enough to know he won't go down without a fight. I may have to club him from behind with a shovel, or poison his coffee, or short-circuit his computer. He's got an incredible ego. He thinks what he has to say is important and that the world needs to hear it. Such people are dangerous and tend to persevere.

But if he were gone, I could convince myself to start fresh and never write a scary book. I could write about easy love and blind faith and sincere trust and happy endings. I'd have snappy, likable characters with indentifiable quirks. I'd create a series character. Two series characters, who quibbled over easy love.

But I suspect Scott Nicholson would slide out of his grave at night, dirt spilling from his rotted jacket as he sought his revenge. I'd go down a lot easier than he would.
Posted by Scott Nicholson at 10:39 AM 4 comments:

With self-publishing so easy that now even a lazy hack like me can do it, a lot of the old arguments for seeking the traditional route have moved to the wayside. Why should authors send off their efforts, or at least send queries about the possibility of sending off their efforts, when they can hit "Presto Change-O Publish-O" on their keyboards and immediately join the ranks of Stephen King and Dan Brown and Mary Higgins Clark?

You can self-publish, get the same playing field at Amazon and B&N as most publishers get (one Web page per book), and then do your own promotion, which most authors end up doing anyway. You get more of the money in most cases. Plus, if you're truly timid, you don't have to face rejection. At least until somebody accidentally buys your poorly edited jumble of alphabet and demands a refund. Alternately, if you're assuming you're too (fill in the blank--"extreme, controversial, daring, literate, good-looking, intelligent, Billy Bob Thorntonish") for the mainstream publishing industry, then go ahead and lulu createspace kindle your way to fame and fortune and giving your momma something to brag about during bridge.

The reality is, getting accepted by a major agent or editor is darned hard, takes lots of work, and requires much luck. You have to be not only good but better than the thousands of other merely "good" writers. You have to not only land on the right desk, you have to do it at the right time with the right project. And even if you beat the odds and get accepted, then the real battle begins. Because thousands of writers are pushing from behind, and thousands of great writers ahead of you are pushing you off the shelves. Given all that, it makes perfect sense to slap up an e-book, or cram fodder through a print-on-demand press.

But you know what? The hard way's still worth it. It's a dream that's almost impossible to reach. In other words, the kind of dream worth having. But what do I know? I only have about 700 rejection slips and eight books out there killing trees. It's worth it.
Posted by Scott Nicholson at 5:30 PM No comments: 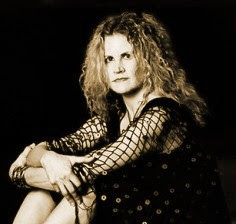 Alexandra Sokoloff is one of the most brilliant writers around, especially in awareness of various storytelling techniques, tricks, and craft mechanisms. Because of her background in theater, screenwriting, and novel writing, she has broad experience from which to draw. Her genius is in analyzing what works in the best thriller and suspense classics, and to understand how those techniques affect audiences. Her blog The Dark Salon has sampling of her new work, and she's also released "Screenwriting Tricks For Authors" for Kindle.

I had the good fortune to teach with her at Pen To Press in 2008, and I believe I learned as much or more than the students did. She was also my bandmate in the original Thriller Killer Band that performed at the first Thrillerfest in Phoenix. If you love taut psychological suspense, give her fiction a try--she's the closest thing to Ira Levin I've found among modern writers.

After reading a few of her blog entries, I'm ready to prowl back through some of my work and add some more suspense. I love writers that make me work harder!
Posted by Scott Nicholson at 8:22 AM No comments: 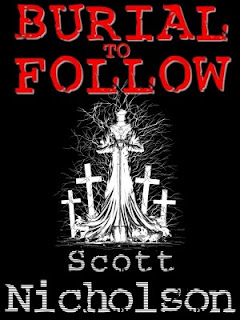 E-book prices are all over the map, from plentiful freebies to the typical "major publisher" price of $9.99.

This is a complicated issue and the best thing about Amazon Kindle is it lets the author set the price. I've published in mass market paperback and trade paperback, but when I released my first novel The Red Church on my own, I set the price at $1.99. I did this for two reasons--at this price, I make about as much in royalty as I did in print, and because I want to reach new readers. Readers are my primary goal, not money. I can make money elsewhere. At the same time, I want to value my work and this price seems fair while also (as others pointed out) encouraging people to try me who might not have heard of me before.
That novel sold well on release, probably around 35,000 copies, but it's been out of print for four years. I want people to read it because I still get excited about it. So any new readers and additional income is gravy to me. However, I could understand setting the price slightly higher for an original release--to between $2.99 to $3.99.
Major publishers are still caught in the dilemma of setting e-book prices high to protect paper sales. They are worried about themselves, not about readers. And that's what they should do, watch out for business, because they are under siege when an author can simply post the book themselves, make it available to a worldwide audience at virtually no overhead cost, and make decisions on when a book is released, what the sales price is, and how it is presented. The author still has to do most of the marketing but that's always been true for all but a hundred or so who are highly successful and in whom publishers have invested much.
I priced Burial to Follow at 99 cents because it's a 20,000-word novelette and I want an audience for it and it was published in a hardcover for limited edition so it hasn't had a chance to reach a big audience, and I consider it one of my top five works. I will soon be releasing a short story collection and mulling over the price now, and I'm putting together a free promotional writing-advice e-book.
This is my personal situation and that's why I've made these decisions--others obviously feel differently, but i modeled my prices after JA Konrath's, who is doing very well in both print and e-book.
And, when all is said and done, why not meet readers halfway, or even further on their side of the bridge?
Posted by Scott Nicholson at 6:58 AM 1 comment: 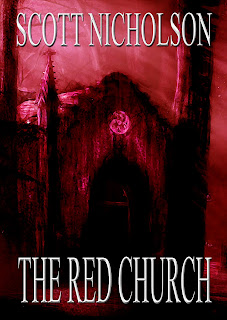 Took the plunge and got it online, along with Burial To Follow. Cover art by Neil Jackson of Ghostwriter Publications. If you have a Kindle, it's specially priced at $1.99. Hope you give it a try--I'm thrilled to get this back out there.
Posted by Scott Nicholson at 3:06 PM No comments:

My beautiful wife gave me a chainsaw for Christmas and it coincided with a major ice storm. So it's been a frenzy of firewood, beaver fever, wood woodies, bzzzzZZZZ. She digs the smell of sweat and sawdust so it all works out.

In writing news, I'm in the stretch run of the last paranormal novel and continuing on with the Richard Coldiron follow-up and planning a cool YA novel. It looks like 2010 will be a great year!
Posted by Scott Nicholson at 4:17 PM No comments:

Scott Nicholson
Author of seven novels, including THEY HUNGER and THE RED CHURCH. Comics in development include DIRT, Dreamboat, The Gorge, Murdermouth, Grave Conditions and The Red Church, as well as the kid's comic Little Shivers. More at www.hauntedcomputer.com.